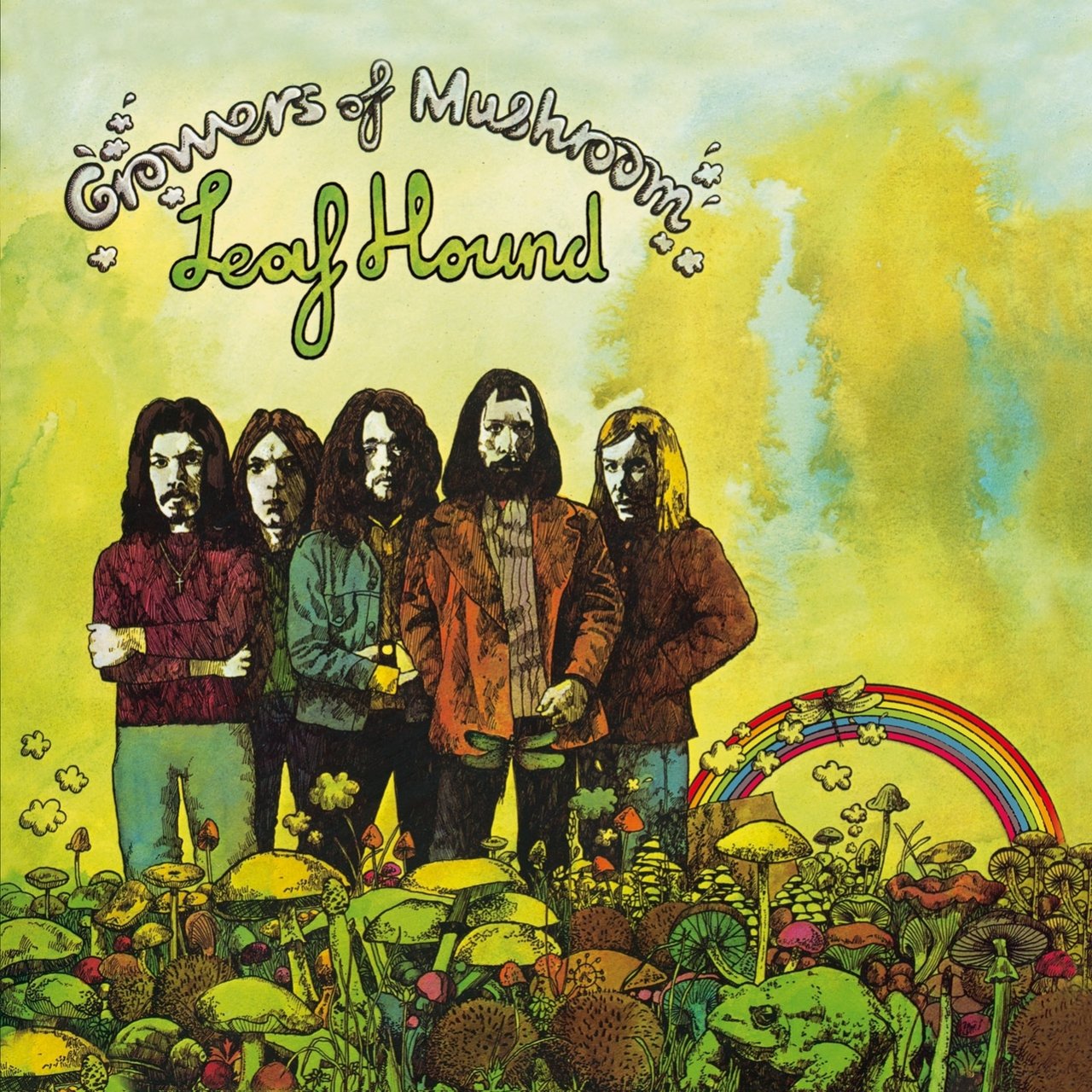 Imagine how it would feel to discover that, among your favorite late ’60s/early ’70s groups, there was a missing album?  A bulletin goes out to the world that The Who, AC/DC & Led Zeppelin members formed a supergroup that made just one wicked rock record?

That didn’t really happen.  But I’ll be damned if Growers of Mushroom doesn’t come close.

The roster of musicians in all iterations of the band Leaf Hound reads like a who’s-who of classic ’70s rock.  The original band was called Black Cat Bones; one guitarist left to join Foghat and the other was Paul Kossoff, who left with the drummer to form a little group called Free.

The singer from BCB was Peter French (who later sang for Atomic Rooster and Cactus) and he recruited his cousin on guitar, a pair of brothers for guitar and bass duties and a new drummer, changed the name to Leaf Hound, and recorded an album in (legend has it) just half a day.  That album was Growers Of Mushroom, and it’s goddamned glorious.

The opening riff is raunchy as all hell, and the ever-sought-after “more cowbell” leads the rest of the band into the dirty rock and roll strut of “Freelance Fiend”. French’s vocals are ’70s rock perfection, barely holding it together in a slinky line of raw high notes.  The guitar solo in the middle is borderline unhinged.  It’s simple, it’s grimy, it’s straight up rock and roll.

The whole A-side follows suit, with some acoustic flourishes thrown in here and there, but mostly it’s a tight rock shuffle with French wailing like a Bon Scott/Robert Plant hybrid over it all.  Side 2 begins with what may be my favorite song ever, “Stray”, which lays out it’s payoff in stripped-down style right at the outset then slides easily into a bouncy riff that holds strong for the rest of the song, dragging you along gleefully until it drops you without warning.

The band finally slows down for the rock ballad “With A Minute To Go”, then goes full Who-style psychedelic for the title track.  Things get grimy again with the excellent break-neck pace of “Stagnant Pool” before shifting to a more playful vibe on the kinetic “Sawdust Caesar”.

Any regular listener of my show knows this is one of my favorite records of all time, and I’m not alone. The original lineup broke up just after their first album, but Peter French managed to reform a new iteration of Leaf Hound in 2004 and they’ve been playing gigs and making new records ever since.  Growers of Mushroom remains a highly sought after collectible, and according to Discogs the median price for the original 1971 UK edition hovers around $3,000.  Thankfully there have been reissues throughout the years and it’s now much more affordable for the casual collector, and I can’t emphasize enough my belief that this album belongs in every rock fan’s collection.